"Which way to the overnight-town?"
R.D.

"My RAD Career" by Bill Allen 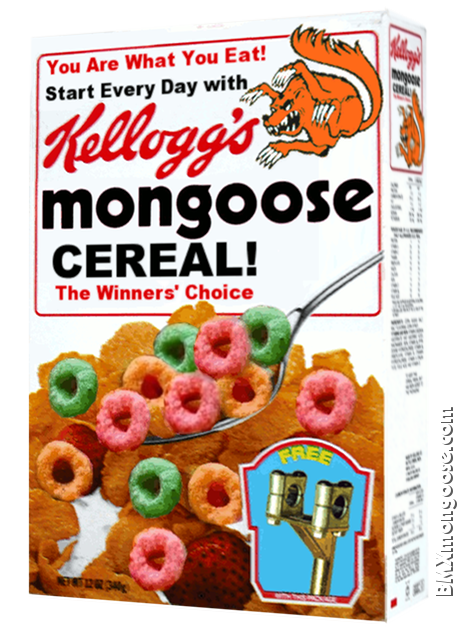 Riding in the upright and
locked position since 1990

Special thanks to Martin Wendt and everyone at mongoose for making this the raddest RAGBRAI in history!

And special thanks to Tri Fly and Damsel Fly for all the great RAGBRAI pics!

The KOS Kruiser has Kruised RAGBRAI! 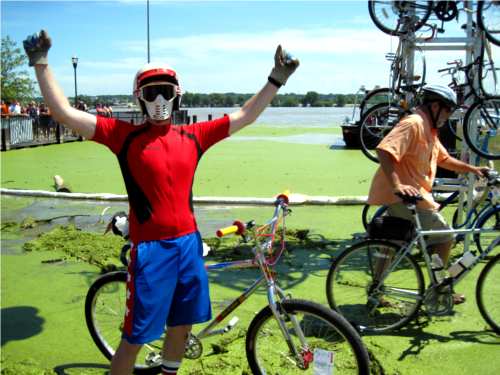 At the Mississippi river with the 2012 KOS Kruiser!

It's official: the 2012 KOS has Kruised all 454 miles of RAGBRAI (plus the 26 mile Karras Century Loop) and it was, by far, the most comfortable ride of my life.

Riding this bike makes me feel like I'm in high school again and Chris Norman said the exact same thing. From day one, I got a very strong impression that this bike is indestructible and I also think it has unlimited potential. The KOS Kruiser can be whatever you want it to be: BMX, freestyle, ramp, mountain, touring - or even road (I get giddy just thinking about putting a 7 speed hub on this thing)! This bike can do it all and knowing me, it probably will!

I still can't believe this bike is real: it's a brand new old school mongoose 4130 chromoly frame/fork that comes factory original with all the new school features that I admire: v-brakes, sealed cartridge bearings, threadless headset and a Motomag chainwheel !!

MORE PICS AND CRAZY RAGBRAI MEMORIES TO BE POSTED OVER THE FOLLOWING DAYS - STAY TUNED !! ^_^ 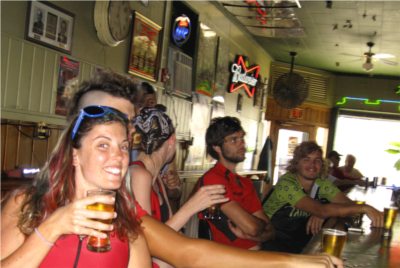 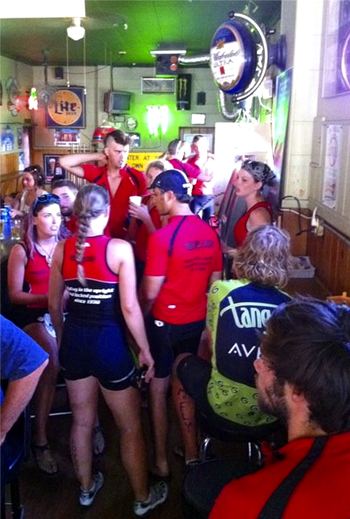 After riding 60 miles, TEAM FLY rode down to the river together and completed RAGBRAI XXXIX!

Afterwards, we drank 50 cent beers, had great Mexican food and joked around a few hours more before hitting the road and going our separate ways.

It's sad that it's over but it will take all winter to sort through all these great memories - and I'm already thinking about next year!

I finished all 7 routes but I have to admit that I didn't make it all the way up "Twister Hill". "Twister Hill" was this year's "Potter Hill" - it was a steep and seemingly endless monstrosity. I only got about 1/3 of the way up before I started walking and just walking it was a workout (Chris Norman would have made it, though)! 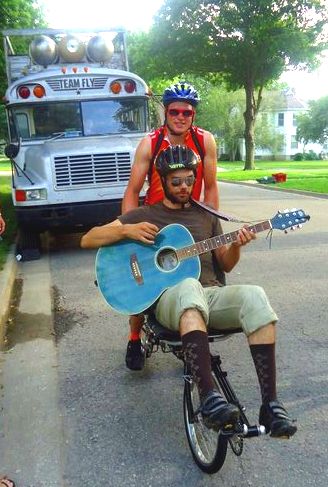 TEAM FLY does it again: the guitar bike!
Driven by Horse Fly, I Believe I Can Fly
sang and played all the way to Coralville!
Click to hear Ben play!

Today, I met a guy from Chicago named Chris Norman who was an old school bmx racer in the early 80s - one year he placed 5th at nationals! I let him ride the new KOS Kruiser and he loved it. He said it was lighter than he thought it would be and that the frame was nice and stiff. He had that bike going 30mph in less than 5 seconds. Chris still has it!

At the time of this writing, I'm halfway through the final day (SATURDAY: DAY SEVEN) and I can't believe it's almost over. Every day has been better than the next and so far, I have ridden every single mile of RAGBRAI XXXIX without any knee pain or trouble at all. 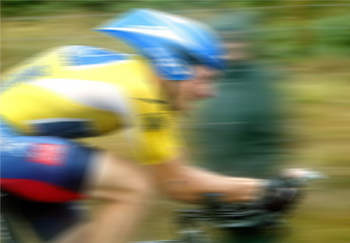 When a really fast cyclist zoomed past TEAM FLY at an incredible speed, McFly said "I bet that's Lance - let's catch up to him!"

So Fez and McFly set out on an epic quest to tackle Lance Armstrong.

After what was surely an exhausting chase, they finally caught up...but it wasn't him.

I heard another story of a peloton being buzzed by an even faster peloton led by none other than 'Mellow Johnny' himself...

...but even if you didn't see Lance, knowing he's there makes RAGBRAI that much more interesting. 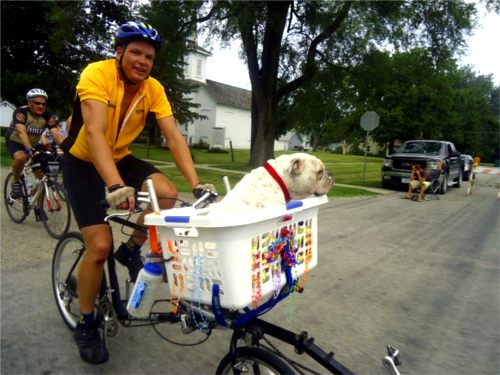 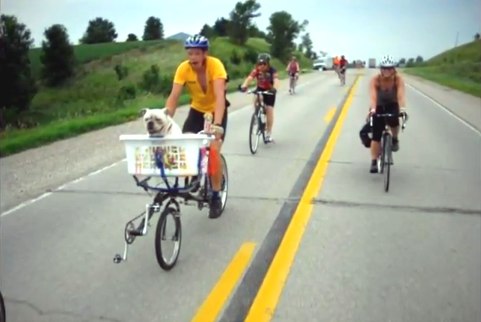 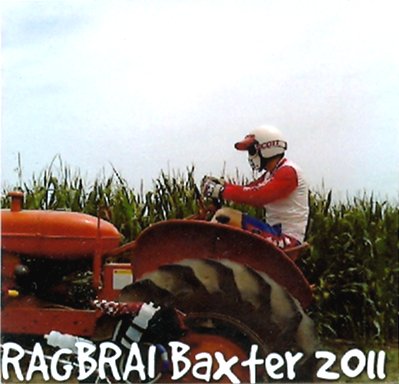 "Why am I always late to the overnight towns?!?"

Uga, the adorable bulldog, rode the entire day in the front basket of Samuel's bike and was a big hit!

Chef Fly made us another awesome pasta dish and meanwhile, in Baxter... 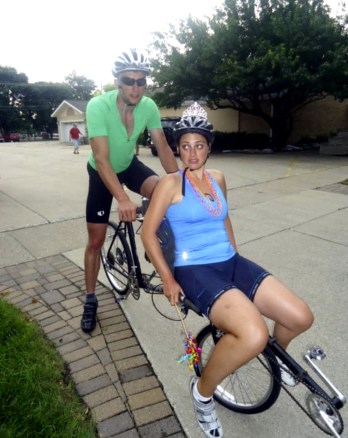 Barfly and the Bicycle Princess! 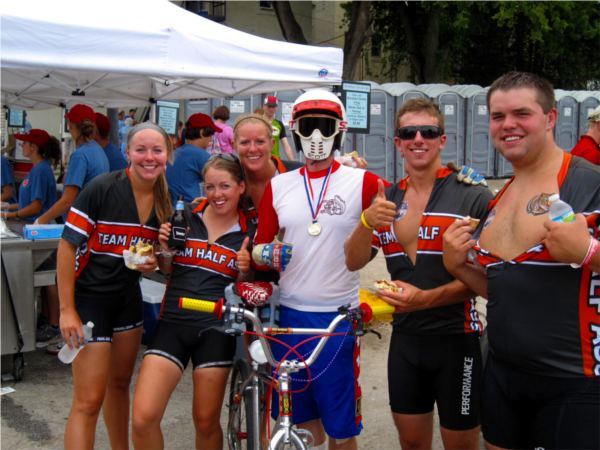 "TEAM HALF ASS" is very thorough in their enjoyment of RAGBRAI! 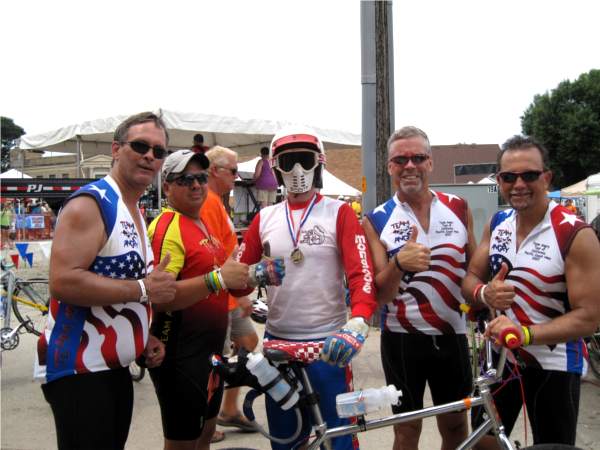 "TEAM ANGRY" was very glad to see me! 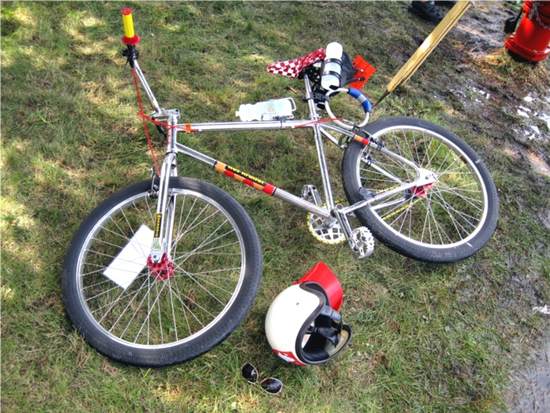 The KOS at an ice cold water station! 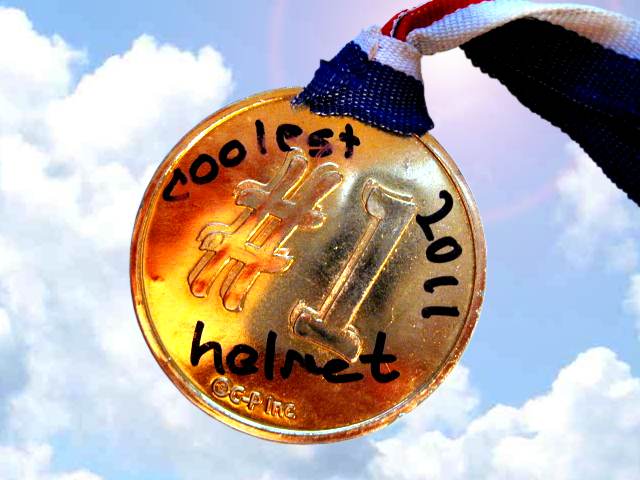 In other news, TEAM C.C. RIDERS awarded me "The 2011 Coolest Helmet Award"! 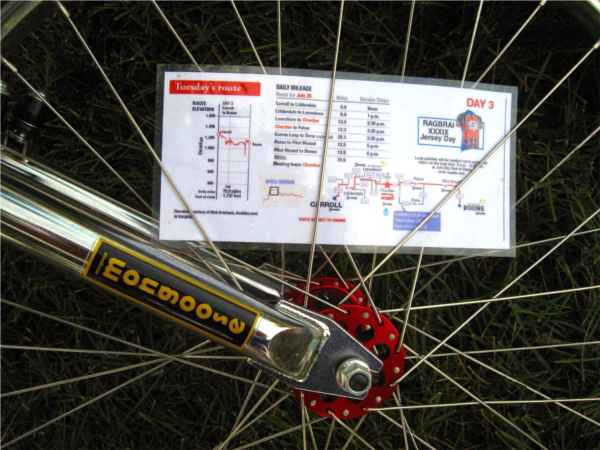 Day One and Day Two were extremely hilly so I was thinking of skipping the extra 30 mile century loop (which increases the day's total to an even 100 miles / 160 kilometers).

But Fez said "Just take it slow, you can do it!" and Horse Fly let me draft behind his big speaker blasting Deadmau5 (which really got my legs going). 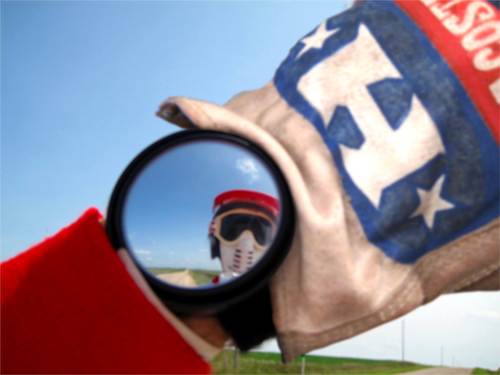 ...where I met Down Town, Curtis Brown from the Tall Dog Bike Club (this is the best RAGBRAI ever)!

After 101 miles (161 kilometers) and just before sundown, I finally reached the overnight town and it was a great night - the air was finally cool when I arrived. Walking around town was amazing, I saw Firefly hooping, an indoor mini RC racecar track and after I finally found a place to sit down, I had some fantastic local BBQ.

Tomorrow is almost all downhill !! ^_^ 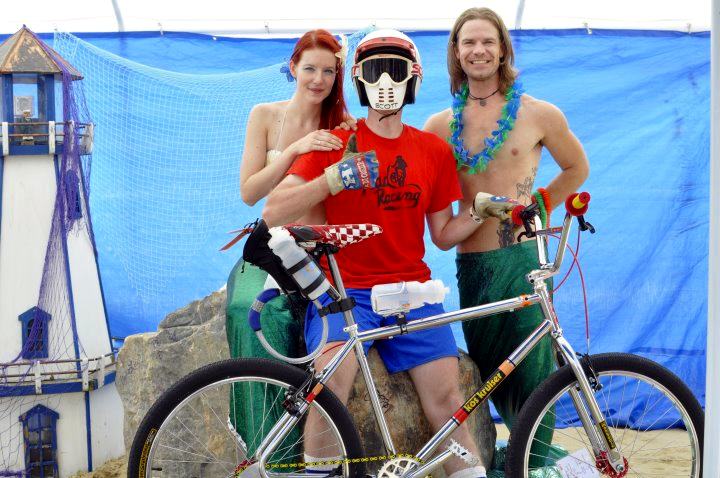 On RAGBRAI, you never know who you'll meet - in Kimballton, I met a mermaid and merman couple! 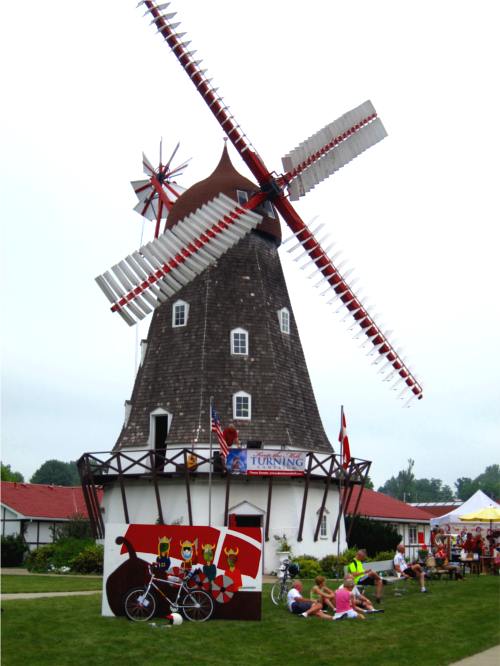 In Elk Horn, Iowa, there's an 1840s windmill from Denmark - and it still works! 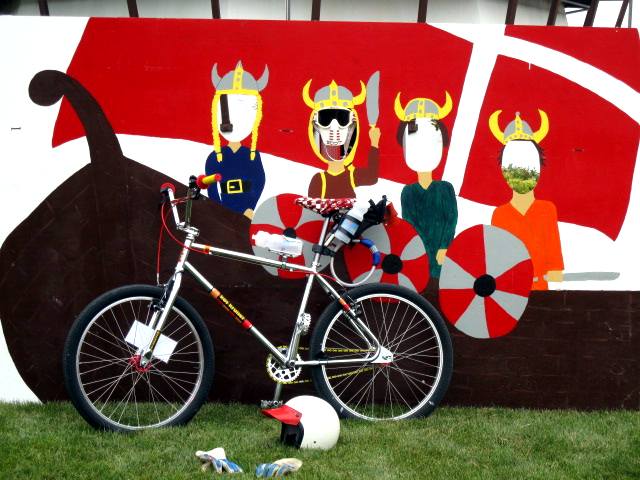 It is widely believed that Vikings are the precursor to RAGBRAI teams. 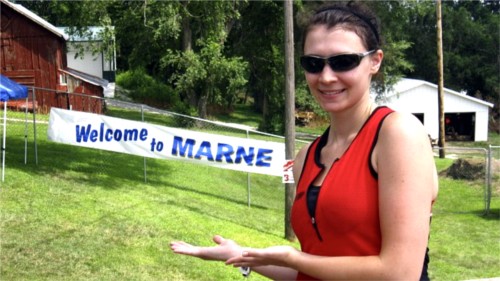 Damsel Fly, living up to her nickname in Marne, Iowa!

Despite having a really bad stomach flu, Damsel Fly put in a herculean effort to finish DAY ONE.

By the time this photo was taken, no one from "Team Molasses Asses" was sober enough to drive!

I still don't know how she made it back. I imagine another team heroically rescuing her - but she probably had to get on her bike and ride there herself!

Near the end of Day One, something unbelievable happened in Griswold, Iowa - a motorcycle repair shop owner named Pete Hokenstad chased me down on his original 1982 KOS Kruiser! 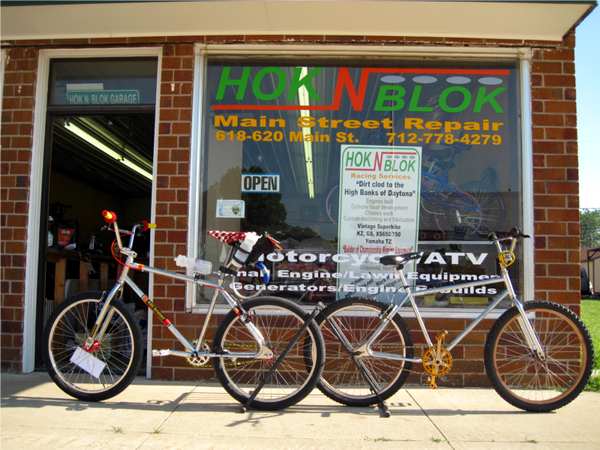 And he even fixed my axle bolt! I mistakenly put a bunch of grease on it when I shouldn't have - but Pete made it right again - he cleaned off all the grease, put some blue LOCTITE back onto the threads and it's stayed that way ever since !! ^_^

What are the odds of meeting a guy like that in the middle of Iowa right when I needed him? Thanks again, Pete!

In other news, Funky Fly got a flat but was back on the road in no time.

In Atlantic, The Greatest Fly Ever got a mohawk and Chef Fly cooked us the greatest pesto of all time - with gazpacho! 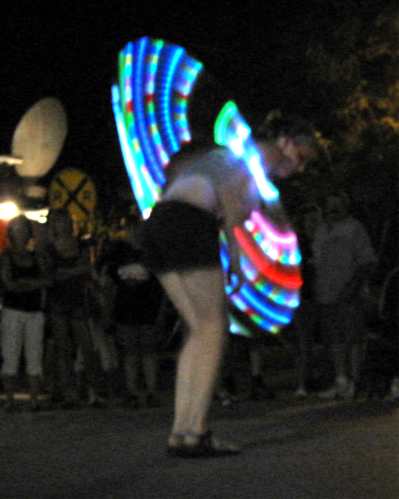 Firefly (a.k.a. Calliope), draws a crowd
during another amazing Hooping Show!

Every night, Firefly performs a Spectacular Hooping Show with her twin sister, So Fly! 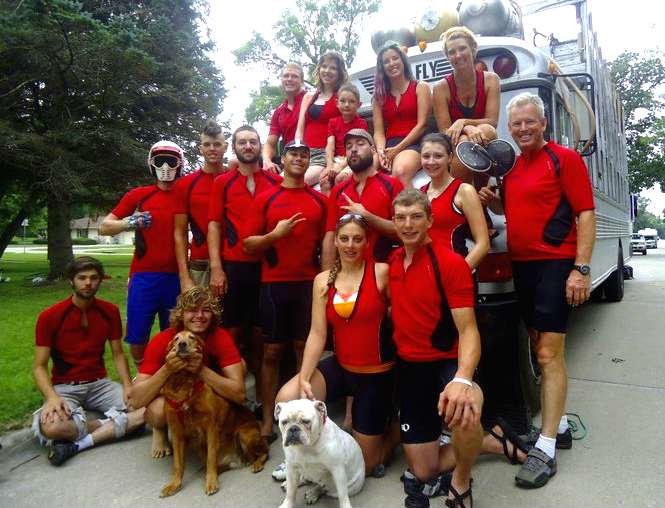 I'm in the starting town with my team, TEAM FLY!

Each member of the team has a nickname with the word 'fly' in it:

Here is a list of our nicknames (see if you can guess which one is mine):
Super Fly
Barfly
Jet Fly
Funky Fly
Chef Fly
So Fly
Firefly
The Greatest Fly Ever
Damsel Fly
Horse Fly
I Believe I Can Fly
High Fly
House Fly
Tri Fly
McFly
Built to Fly

RAGBRAI is cycling utopia - right now there are people on bikes everywhere and everyone is so nice. There's a lot of really great food and music too.

I met up with TEAM FLY in Davenport, Iowa before our drive to Glenwood. 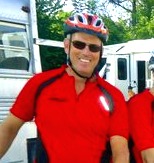 The Captain, Engineer and Pilot,
Big Jesse a.k.a. Super Fly! 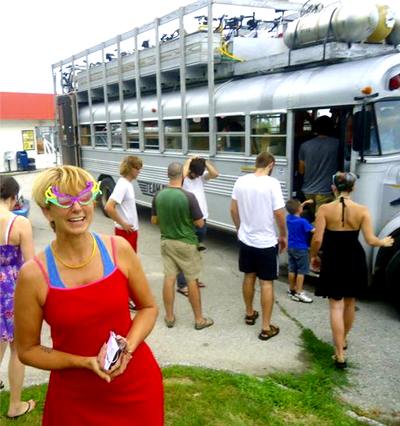 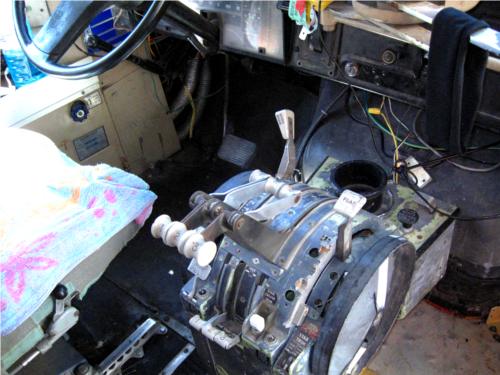 Until you know how to start a TWA 727, you wont be able to start this bus. 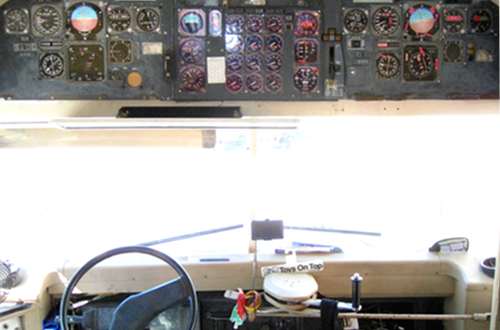 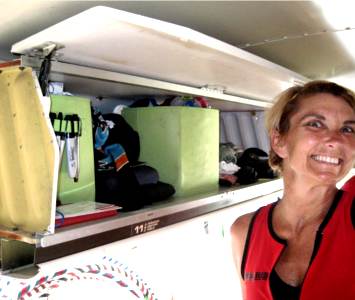 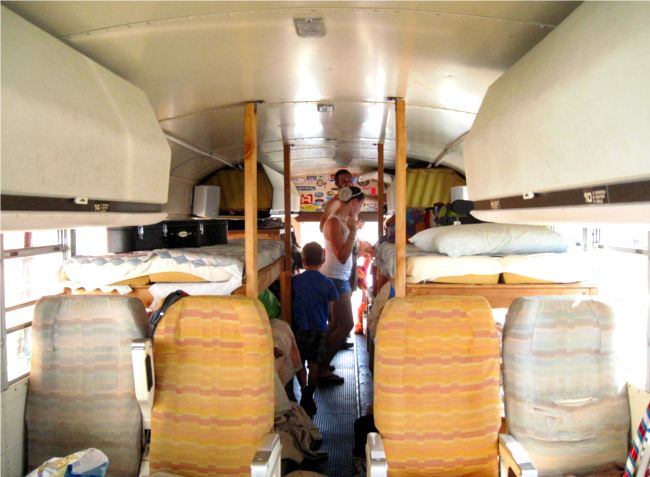 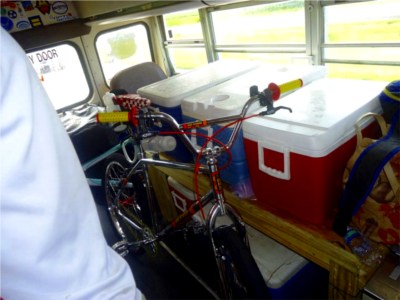